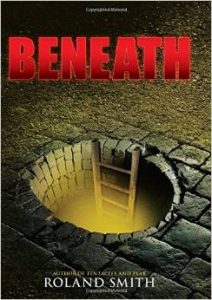 Pat O’Toole has always idolized his older brother, Coop. He’s even helped Coop with some of his crazier plans — such as risking his life to help his big brother dig a tunnel underneath their neighborhood in the suburbs of Washington, DC. Coop is . . . different. He doesn’t talk on the phone, doesn’t use email, and doesn’t have friends. He’s never really cared for anything but the thrill of being underground and Pat. So it’s no surprise to anyone — even Pat — that after a huge fight with their parents, Coop runs away. Exactly one year later, Pat receives a package containing a digital voice recorder and a cryptic message from his brother. He follows the clues to New York City, and soon discovers that Coop has joined the Community, a self-sufficient society living beneath the streets. Now it’s up to Pat to find his brother — and bring him home.

You can find Beneath at your local bookstore, or order it online: Amazon, Barnes and Noble, Powell’s Books, Indie Bound