Woke up 3:30AM to catch a flight to DFW via Memphis (not the most direct way to get from Arkansas to Texas). I get an email saying the airplane was turned around last night due to fog and will be leaving 3 hours late, which means I’ll miss my comnection in Memphis.

I call to ask the about this. They say I need to be at the airport for the flight even though it isnt there. “Just in case it did get there.” (I’m not kidding)

I jump in the rental car and drive to the airport.

Before I go through TSA I stop at the NWA counter to check on the flight. It didn’t come in the night before and it’s delayed. (Duh). The woman in front of me is put on an American flight (direct) to DFW. I ask if I can get on that flight too. Answer: “No!”

I go through TSA and walk down to my gate, where my flight isn’t even listed. I tell them I have a problem and ask for their help. They say: “Okay, why don’t we put you on the direct American flight that leaves at 7:00 and arrives at 8:20.”

Exit Row window seat with an empty seat in the middle and I arrive at DFW 2 hours before my original flight. I’m in my hotel writing by 9AM.

Be polite. Take “no” for an answer, then ask the same question to someone else until you get a “yes.” If an airport is beginning to have problems fly to another airport as fast as you can. 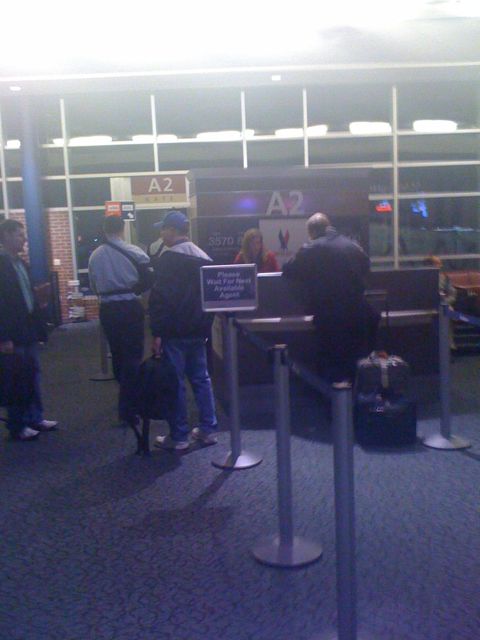