A little pre-Christmas round up… 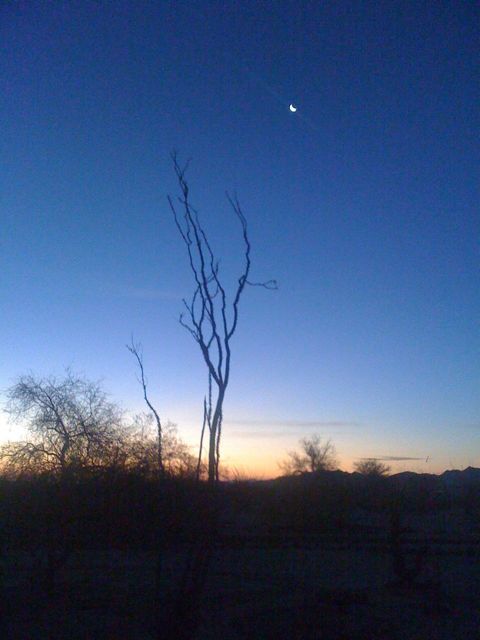 Sunrise out the front door

Don’t think it’s all writing and eating food down here. There are errands to run in paradise.

Our Internet went out late last week. Of course we thought it had to do with the router we installed, but after reconfiguring it from scratch approximately 7,000 times, then talking to couple of neighbors who said their Internet was working perfectly, we came to the conclusion that our Internet had been shut off at the source. The source is the phone company, which has exactly ONE employee to takes care of problems for the entire town of several thousand people. Marie made two trips into town (16 miles round trip), waited in line twice, and actually had to stamp her foot in anger to get it back on.  They told her that it would take four of five days to come back on, but it came on with in an hour.  I think the foot stamp did the trick.

Solar power is wonderful, but as I mentioned earlier it’s not quite as simple as paying your electric bill and flipping a switch on to be bathed in light. There is plenty of sun down here, but the days are short, and there have been some clouds, which means we have to fire up the gas generator almost every night for a couple of hours to top the batteries off. This has not been helped by the fact that we’ve spent the past few nights watching Bob Hope and Bing Crosby “Road” DVD’s, which are hilarious and holds up after 60 years.  To keep the generator going we have to drive to the gas station once a week to fill the gas jugs.  Oh the burden of a little carbon footprint.

Yesterday we drove to the BIG city to get food for Christmas dinner. We came back with enough food to feed the men at the Mexican army check point for a week. The problem is we don’t have anywhere to keep the food until Christmas. Solution? We trudge across the desert with our frozen turkey, break into Marie’s sister’s house and put the bird in her freezer.