It’s getting colder down here, especially in the mornings.  The pas

t couple of days it’s only gotten into the mid-sixties.  I know, I know… I’ve seen the weather reports for the U.S.   It’s probably a lot warmer down here than where you are, and that’s one of the reasons I’m here.  (Click on photo for 360 View from the Roof).

I usually wake up around five in the morning…still dark out.  The trick is not to disturb anyone.  Writing is normally a quiet activity, but I just can’t seem to get started without a cup of coffee in my hand.  And making coffee in the dark is anything but quiet.  So I make it the night before, put it in a thermos (which Marie bought for me the day before yesterday), and now I’m good to go.

Speaking of the dark, we run on solar power down here, which takes a little getting used to.  There are solar panels on the roof, 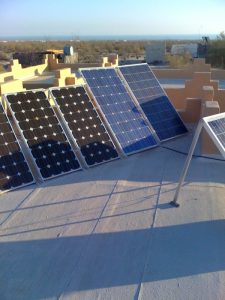 batteries down below, and a bunch of gauges that look like they belong in a rocket ship.  Solar power is not as simple as turning on a switch.  You have to know things about volts, watts, cells, specific gravity, and a lot other words I can’t pronounce.

So this afternoon I’m writing, and I start to think about the batteries (probably because the writing wasn’t going to well).  I wander into the battery room and open the batteries up to see if the fluid levels are okay.  Looks okay to me.  I then go to the panel and look at the readout.  I have no idea what it means–so I guess that’s okay too.  But it has been a little cloudy the past couple of days and I’ve heard a lot of generators rumbling in the neighborhood during the day.  I start to wonder why they have to turn their generators on and we don’t.

So, I turn the generator on, then I sit back down and resume my writing.  About ten minutes later Steve (the 12 volt man) pulls into the driveway to do something to our water pump.  He is also the solar guy, and he’s really helped us out down here.

Steve:    “How long has your generator been on?”

Steve:     “You lost power and you only turned the generator on for a half an hour?  We need to check your specific gravity.”

Steve is a great guy and makes his living on guys like me.  I failed the specific gravity test.  Also, the fluid in the batteries was too high.  There is a reason the generators are running all over the neighborhood.  It’s because everyone in the neighborhood knows that when it’s cloudy your solar doesn’t work and you have to turn on your generator or you will ruin your batteries, which cost more than a new generator.

Steve fixes everything.  As he’s leaving…

Steve:  “You got internet?”