Touch & Go they called it years ago when I was getting my pilot’s ticket. You’d come in for a landing, and as soon as the gears touched down, you applied full throttle and took off again. That’s what today feels like…

Home late Friday, errands, laundry, repacking Saturday, then off again today. It will be a shorter T&G next week. Home Saturday, take off Sunday.

Headed to Texas this morning for a school week in Copperas Cove, Nacogdoches, and Pollock (love the names) then Friday evening I fly to Salt Lake City and drive south to Elko, Nevada to pick up The Nevada Young Reader’s Award for “Peak,” then I drive back up to Salt Lake to fly home for a few hours.

When Marie and I were in Florida a librarian hand-delivered a hand-written letter from a “44 year old” bus driver who says he’s not much of a reader, but he reads to the kids on the bus while they’re parked at the school waiting to get off: “To keep them quiet you know, and it works.” On Friday he has them read to themselves. He may not know it, but he’s book whisperer. Perhaps he’s read Donalyn Miller’s book.

I’ll write him a hand-written letter (a rarity for me) sometime this week on Texas hotel staionary.

I also recieved an email last night from my oldest grandson’s (JR) science teacher. She’s been on a Roland Smith novel reading marathon the past few weeks, having read 10 of them so far. She said that she is going to try to use some of the science in the books in her class.

It’s amazing how a letter and an email can cure jet lag. They’re better than sleep, and they are one of reasons I write books.

Thanks for making this T&G smooth! 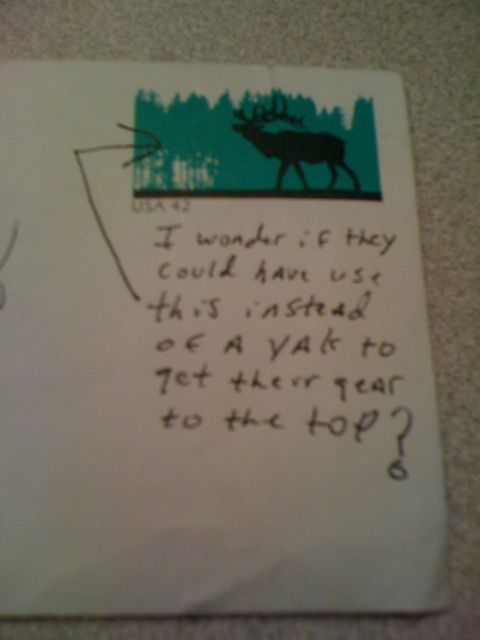