Up at 6 after a relatively late night (for me) reading.  And I think all of those chile rellenos I’ve consumed the past few

months finally caught up with me, causing some fascinating reactions.  It’s a bit overcast here today, but still nice.  We’ve been reading about the wintery weather up north and you have our sympathy.  A week from today we’ll be back home, hoping that all the snow has melted by the time we get there.  This first photo is a shot from the roof of the casa at sunset taken last night.

This second photo obviously has nothing to do with I,Q 2.  It’s the cover of the United Kingdom version 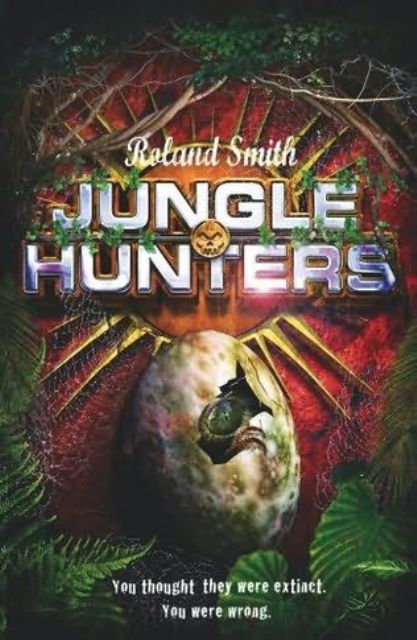 of “Cryptid Hunters” which they are calling “Jungle Hunters.”  It will be out “over there” in May.  I love this cover.  If you look closely at the dinosaur hatchling’s eye you can see the jungle reflected in it.  Nice!

Back to I,Q2.  Someone guessed correctly yesterday that P.K. stands for President’s K

id.  Congratulations!  P.K. is actually a character I came up with many years ago.  I was thinking of writing a series of novels about him, but for various reasons the novels didn’t come about.  These characters, whether they appear in books or not, tend to stick with me like old friends.  I’m obviously delighted to have found a role for P.K. to play and to introduce him to you in I,Q 2.

Another slight shift in this sequel is that you are going to learn a lot more about Malak (a.k.a. The Leopard).  I have written her into several scene’s from her POV (point of view).  She’s given up so much in order to try to take down this terrorist cell I thought it was important to  give her a more visible role in this book.

The SOS team also recruits a couple new members, which they badly need. One of them is an old friend of Tyron Boone’s…  And both of the new characters are old friends of Malak.

Today was a bit of a disjointed day.  Not because of any interruptions.  I had to slow the writing down and spend a few hours asking myself some questions about the story.  I actually write the questions down and answer them, which helps to solidify the path I’m traveling.  If I were drawing a map the questions would run along the lines of:  “What happens if I turn here?   Would it be better for me to take the right fork, or the left?”

When I get this far along in a novel I start to think very specifically about the ending and “exactly” what steps I have to take to  get there.  Of course this book is not going to have a “complete” ending, because there will be an I,Q3, but there are several issues that have to be resolved and other plot points that need to be set up for Book Three.