Arrived in Mexico last night after about 15 hours of travel. It’s beautiful down here, warm, and quiet. I tried for two hours to set up the wireless router I hauled down here and failed. Marie took over and had it up and running in less than 10 minutes. This is my first post from 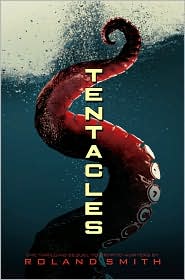 down south and I’m delighted to include a very good review of Tentacles from School Library Journal.

Gr 5–8—Since the disappearance of Marty’s parents, he and his cousin Grace have lived with her father, the renowned cryptozoologist Travis Wolfe. This sequel to Cryptid Hunters (Hyperion, 2005) begins with Wolfe mounting an expedition in search of a mythological giant squid. Marty, his friend Luther, and Grace join the crew aboard the Coelacanth, a refitted freighter. Unknown to Wolfe, however, his archenemy Noah Blackwood is in hot pursuit, determined to steal the gigantic creature and destroy Wolfe and his reputation. Add hatching dinosaur eggs, a manic chimpanzee, cool gadgets, a nifty undersea nuclear submarine, ruthless villains, murder, and sabotage to the mix and you’ve got a high-octane page-turner that will reel readers in and keep them riveted. Several unanswered questions suggest another sequel may be in the works, which will make Smith’s fans very happy.—Jane Henriksen Baird, Anchorage Public Library, AK

One thought on “Mexico and Nice “Tentacles” review from SLJ”